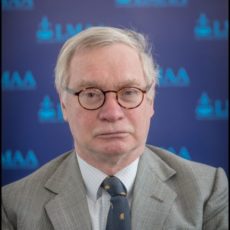 Tim Marshall read Modern History at Trinity College, Oxford. He then studied law and was called to the Bar by the Middle Temple in 1975. He was a pupil at 4 Essex Court (now Essex Court Chambers), and worked with Mark Saville (now Lord Saville) and Anthony Colman (former Commercial Court Judge).

He left the Bar and joined the City firm of Holman, Fenwick & Willan, requalifying as a solicitor. He became a partner in 1988. He handled a wide variety of dry shipping matters, including disputes arising out of charterparties, bills of lading, new buildings, sale and purchase MOAs, and marine insurance claims. He also dealt with international trade litigation, especially oil trading disputes.

He left the City in 1991 to become a partner in a West End firm which was handling litigation involving the LMX reinsurance spiral at Lloyds, and the losses suffered by Names in that market.

Formerly the in-house counsel for the largest fleet in the Middle East.
Contact