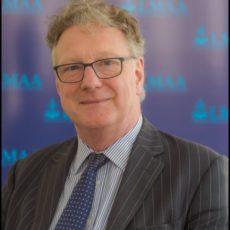 back to list
Duncan Quinan
Full Member, LMAA Committee
Duncan Quinan is a full-time arbitrator with over 35 years’ experience of arbitration in the shipping and transport sector. He qualified as a solicitor in 1981 and remains a solicitor and member of the Law Society. Duncan worked at Sinclair Roche & Temperley in the 1980’s before becoming a Dispute Resolution Partner at Bird & Bird (until 2008) and subsequently Lewis Silkin.

Duncan has arbitrated throughout his professional life and has been involved in over 350 arbitrations as a lawyer or arbitrator. He is admitted as a Solicitor in Hong Kong and as a Solicitor and Barrister in ACT, Australia.

The majority of Duncan’s appointments have related to shipping and international trade, including disputes under charterparties, contracts of affreightment, bills of lading and commodity sales contracts. However, he has also been involved in disputes in other commercial areas including aviation, banking, construction, commodities, pharmaceuticals and property.

Duncan is a Fellow of the Chartered Institute of Arbitrators (FCIArb) and a Member of the Baltic Exchange.
Professional Practice
Contact