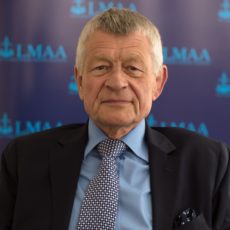 Mike began his professional career in the Royal Navy. Following bridge and engine room training both ashore and at sea in a frigate, minesweeper and aircraft carrier, he obtained a BSc in mechanical engineering from the Royal Naval Engineering College, Manadon. After a post graduate course in nuclear physics at the Royal Naval College, Greenwich, he served as an Engineer Officer in nuclear submarines during the Cold War.

He resigned his commission and qualified as a solicitor in 1979. He has extensive litigation and arbitration experience.

Mike’s practice has covered all areas of shipping law with particular emphasis on technical disputes, ship building, ship conversion and repair as well as marine insurance and charterparty disputes and cargo claims. He has travelled worldwide investigating casualties, collisions, machinery failures and salvage claims. He is Chairman of the International Tug, Salvage and Offshore Convention.

He was accredited as a mediator in 2005 and is a member of the Maritime Solicitors Mediation Service panel.

He has practised as a maritime arbitrator since 2010.
Professional Practice
BSc, CEng, MIMarEST
Contact